Lessons from a Trillion Dollar Coach

“Everyone needs a coach”  – Eric Schmidt 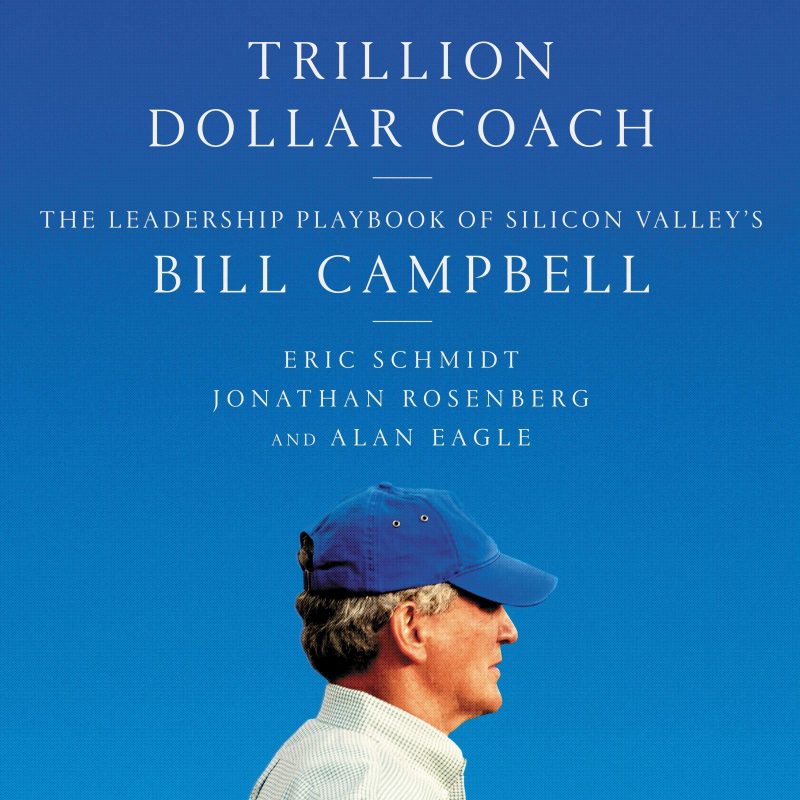 Someone who understands the value of coaching is Eric Schmidt. Eric is Technical Advisor and Board Member to Alphabet Inc., where he advises its leaders on technology, business and policy issues. Eric joined Google in 2001 and helped grow the company from a Silicon Valley startup to a global leader in technology. He served as Google’s CEO from 2001-2011, and Executive Chairman 2011-2018, alongside founders Sergey Brin and Larry Page.

He is the co-author of ‘The New Digital Age’, ‘How Google Works’, and the recently (April 2019) published book, ‘Trillion Dollar Coach: The Leadership Playbook of SiliconValley’s Bill Campbell’, which he co-authored with fellow Google leaders Jonathan Rosenberg and Alan Eagle.
In this latest book – a tribute to coach Bill Campbell – the authors explain so wonderfully well why coaching matters in the business world, and the immeasurable impact late coach Bill Campbell had on Silicon Valley’s rise as a veritable modern superpower.

“Everyone needs a coach”, Eric states in the inspiring podcast interview about the book in The Tim Ferris Show.

INSPIRING THOUGHTS AND IDEAS FROM THE BOOK

Silicon Valley’s best kept secret.
Bill Campbell is, in the opinion of the authors, the most successful coach in world history. He was the primary coach for Google in its rise. He was also the primary coach for Apple in its rise along with a host of other companies. And some of the companies that he has coached have now exceeded more than $2 trillion of value. This gives a sense of the value that he helped create.

Why coaching matters in the business world.
Eric was initially resistant to the idea of having a coach, “I don’t need a coach. I’m really good.” It was Bill’s trustability, sincerity and professionalism that convinced Eric. “In hindsight, his role was needed from the beginning. I should have encouraged this structure sooner, ideally from the moment I started at Google.”
Having a coach involved can be a hard thing for executives to accept, and miss-perceived as a sign of lack of confidence. However, a research study pointed out that it is the most insecure executives that are threatened by suggestions from others (in other words, coaching). Conversely publicly accepting a coach can be a sign of confidence.
For 15 years, Bill met Eric just about every week. And not only Eric: Bill became a coach to co-author Jonathan Rosenberg, Larry Page, and several other Google leaders. For those 15 years, Bill’s counsel was deeply influential. He made sure the team was communicating, that tensions and disagreements were brought to the surface and discussed, so that when big decisions were made, everyone was on board, whether they agreed or not. And while he was working with Google’s senior team and with Steve Jobs at Apple, he was also helping many more.
Bill was the best coach of teams ever. And why do you need a team? Because a company is not an individual, it’s a team of individuals who need coaching to achieve their objective. He understood how to coach teams of people who were, themselves, competitive with each other.

Google’s project Aristotle.
In 2013 Google’s People Operations Group conducted a rigorous analysis deemed Project Aristotle to identify the indistinguishable characteristics of their most successful teams resulting in five key factors. The researchers found that what really mattered was less about who is on the team, and more about how the team worked together. Bill was a master at establishing these conditions into each team he coached :

Smart Creatives.
In the author’s previous book, ‘How Google Works’, a new breed of employee, the smart creative, is described. They combine technical depth with business savvy and creative flair. These smart creatives have always existed, but with the advent of the internet, smartphones, cloud computing and all their attendant innovations, they have much greater impact then ever before. For companies to be successful, they must continually develop great products, and to do that they must attract smart creatives and build an environment where these employees can succeed at scale.

High performance teams that act as communities.
Next to smart creatives, there is another, equally critical, factor for success in companies described in this book : teams that act as communities, integrating interests and putting aside differences to be individually and collectively obsessed with what’s good for the company. Research shows that when people feel like they are part of a supportive community at work, they are more engaged with their jobs and more productive. Conversely, a lack of community is a leading factor in job burnout.
But high performance teams don’t always operate this way. Such teams are by their nature populated with smart, ambitious, strong-willed, opinionated people with large ego’s. These people can work together, but can also be rivals. Or if they are executives, they are often positioning their organizational silo’s against each other to capture more resources and glory. Teams of people who subordinate individual performance to that of the group will generally outperform teams that don’t. The trick is to corral any such “team of rivals” into a community and get them aligned in marching toward a common goal. To balance the “tension in the machine” and mold a team into a community, you need a coach, someone who works not only with individuals but also with the team as a whole to smooth out the constant tension, continuously nurture the community, and make sure it is aligned around a common vision and set of goals. Sometimes this coach may just work with the team leader, the executive in charge. But to be most effective – and this was Bill’s model – the coach works with the entire team.
Every company that wants to succeed in a time where speed and innovation are paramount, must have team coaching as part of their culture. Coaching is the best way to mold effective people into powerful teams.

“A coach masters the art of identifying tensions amongst teammates and figures out to resolve them. The best coaches make good teams great.

Being fully present.
“This is what I’m working on. This deserves my full attention.” In coaching sessions, Bill’s active listening was usually accompanied with lot’s of questions, a Socratic approach. Listen with your full and undivided attention and ask questions to surface all ideas and perspectives, to get to the real issue.

An extraordinary coach of humans.
If you’re going to manage people, or lead them, lead the whole person. “How are you? How is your family? How is your operation? What are you worried about?” Whatever it takes to get people to be humanized turns out to be key and the difference between a coach and a manager. Bill considered compassion as a key factor for success.

To be a great manager, you have to be a great coach. After all, the higher you climb, the more your success depends on making other people successful. By definition, that’s what coaches do. Coaches don’t just believe in your potential; they get into the arena to help you realize your potential. They hold up a mirror so we can see our blind spots and they hold us accountable for working through some sore spots. They take responsibility for making us better without taking credit for our accomplishments.

“It’s the people.
The top priority of any manager is the wellbeing and success of her people.

Google’s “disorg” – early experiments in self-management
In 2001, when Google had several hundred employees including many software engineers, they decided to experiment running a fast-moving (today you could call it “agile”) product development team without managers. They called it the “disorg”. “Why do you need a manager? Why not just let supertalented engineers work on projects, and when their work is done, they can go pick another project?”
It was by talking to engineers that Bill surfaced the fact that engineers actually liked to be managed as long as

Although it took a while to convince the founders (Larry & Sergey) – Google engineering continued in “disorg” mode for more than a year – they finally called it quits and brought back people managers near the end of 2002.

At Valexion we are learning, through research and experience, that there are several principles and key factors that contribute to the successful creation of high-performing self-organizing teams :

There is no doubt that we are done with old school hierarchical organizational structures – definitely if you want to attract and retain new talent or millennial smart creatives. However, implementing organically self-organizing systems is not easy. Valexion can assist you in such cultural and organizational transformations.
One could argue that self-organization is more relevant in companies that are in an innovation phase where creativity and agility should thrive, while less so for companies that are in an exploitation phase where focus should be on operational efficiency and execution. However ask yourself the question ‘how long will a company survive if it is in exploitation mode only?’. How is it creating value in a sustainable way?
At Valexion we strongly believe that sustainable value driven innovation is crucial for every company or organization, and the shift to a new form of agile leadership with growth mindsets, and network-oriented self-managing organizations will be inevitable for survival.

In this book the authors further examine what Bill coached and how he coached – what his approach was :

Both the what and the how may seem so simple in concept at first. But as any experienced leader knows, they are hard in practice.

“Your title makes you a manager.
Your people make you a leader.

Eric Schmidt serves on the boards of The Mayo Clinic and The Broad Institute, among others. His philanthropic efforts through The Schmidt Family Foundation focus on climate change, including support of ocean and marine life studies at sea, as well as education, specifically cutting-edge research and technology in the natural sciences and engineering. He is the founder of Schmidt Futures, which works to improve societal outcomes through the development of emerging science and technology.