Skip to content
The Age of Regeneration – “Save Soil”

The Age of Regeneration – “Save Soil”

“Right now, the most important aspect of conserving nature is the soil. If we do not stop soil degradation, the planet will not be conducive for human beings to live upon it.”  – Sadhguru 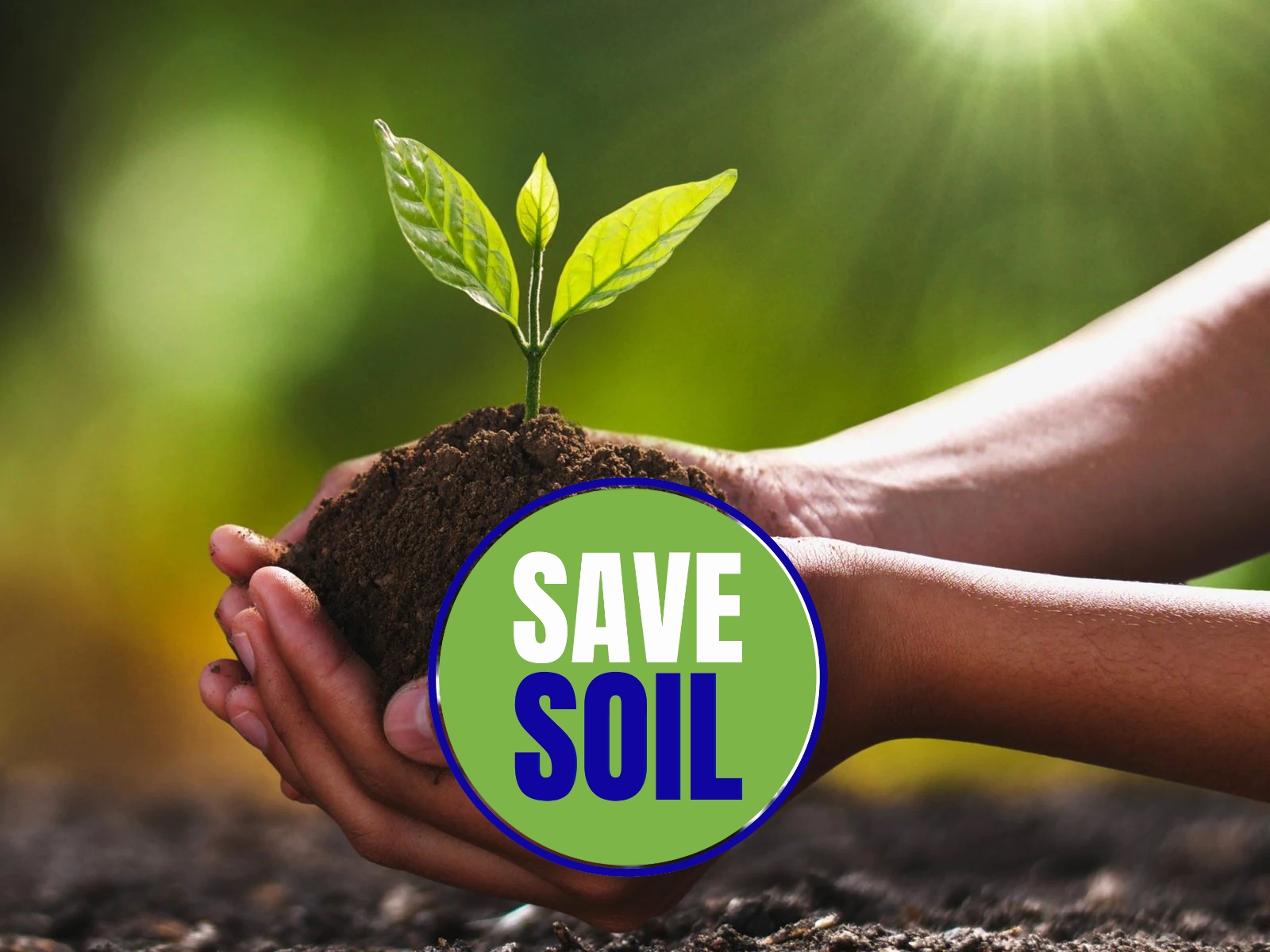 Beyond Sustainability – The Age of Regeneration
They say we are living in the age of sustainability. Transitions to more sustainable ways of living are already underway, and there is mounting evidence that we may be entering a period of great transformation that could result in a shift from the industrial epoch to a more sustainable and equitable age. Geopolitical issues are painfully pointing to our dependance on unsustainable energy sources and food chains. There is growing recognition that achieving prosperity within environmental limits requires fundamental changes in core systems of production and consumption. There is a general consensus that we need to establish a more sustainable and equitable world. Achieving such sustainability transitions requires that all policy areas and levels of government operate together to harness the creativity and power of citizens, businesses and communities. Environment and climate policy tools are essential but transforming systems also requires coherent contributions from many other areas, ranging from research and innovation, industry, competition and trade, to employment, education and welfare. However, the term sustainability begs us to explain what it is we are trying to sustain. And is merely sustaining really enough?

Beyond sustainability, the 21st Century will be the century of ecosystem and Earth regeneration, otherwise the 22nd Century might see a greatly impoverished planet without us. In “shifting from ‘sustainability’ to regeneration” Bill Reed stated that we need to un-do the damage done already, wherever possible (see Reed’s graph below). We need to move from ‘design for sustainability’ to restorative and reconciliatory design, and beyond that to regenerative design. We need to further deepen our practices and go beyond merely being sustainable to actually regenerating the damage humanity has wrecked on the planet since the dawn of agriculture, city states and empires. At a basic level regeneration also communicates not to use resources that cannot be regenerated, nor to use any resources faster than they can be regenerated. 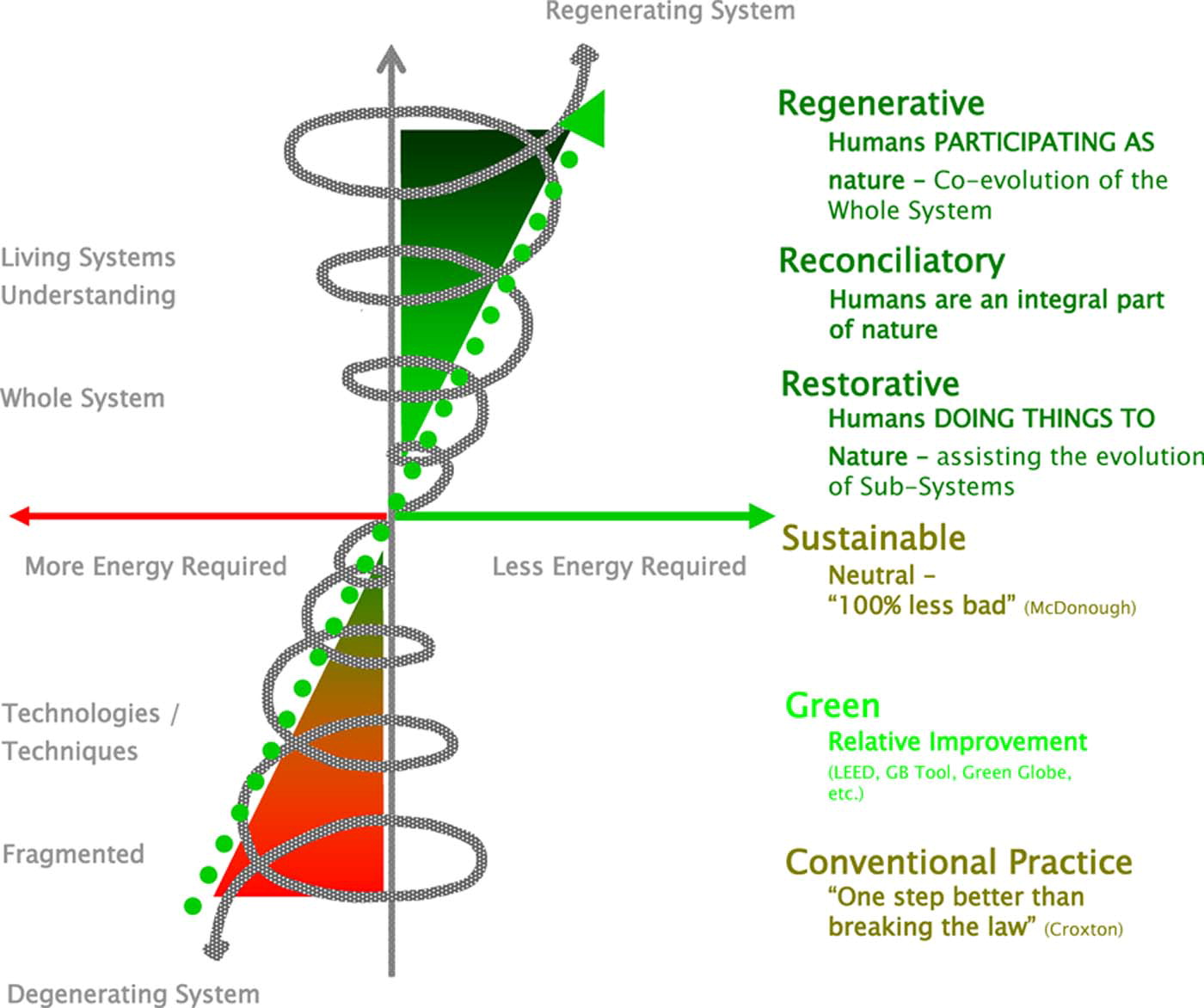 Reed described a journey that starts at what you might call ‘business as usual’ — basically not breaking the law and only damaging ecosystems and societies within the limits set by regulatory bodies. From business as usual we move to ‘green’ — doing a little more than we have to legally by polluting a little less, using less energy from non-renewable sources, etc. This is a step often abused for greenwashing, yet it is a necessary step on the journey. Then we get to sustainable, the neutral point of impact — not doing any additional damage. Yet we have done so much damage since the industrial revolution that we need to do more than that if we want to sustain a human population of more than 9 billion, possibly 11 billion, people by mid-Century. As we move beyond sustainability and start to work on restoring damaged ecosystems, we can still do so in a mindset that sees humanity as masters and manipulators of nature rather than as participants in its life-sustaining processes. This engineering mindset to restoration can create projects that restore forests or ecosystems at first but do so in ways that are not systemic and integrative and hence these efforts and their effects might only be short lived or result in unexpected and negative side-effects.

Our current unsustainable patterns of production and consumption are based on a misguiding and outdated view of the world that still maintains that we have to seek competitive rather than collaborative advantage. It conditions us to believe that it is inevitable to have winners and losers, rather than understanding that on an overpopulated planet facing multiple convergent crises even the winners will loose if we do not stabilize climate patterns and begin to regenerate health ecosystems functions. Responsible business leaders are beginning to set their companies on a different path based on collaborative advantage rather than competitive advantage.

“Creating a Conscious Planet is possible only by raising human consciousness. It is important for all – particularly leaders whose decisions affect millions of lives – to be conscious and inclusive.
– Sadhguru

Soil Degradation, a Global Issue – “Save Soil”
One of those vital elements of life on earth that has been degrading at an excessive pace is soil. Across the globe, fertile soil is dying. Our food, water and air depend on it. According to the UN, the world has only about 60 years of harvests left before cultivable soil becomes desert. Unless we act now, 90% of Earth’s soil could be degraded by 2050 (UNCCD, 2020 [1]). A global food crisis would become inevitable.

95% of our food grows in the thin, uppermost layer of soil, known as topsoil. For enough nutritious food to grow, the minimum level of organic content in topsoil should be 3-6%. But we’re falling short:

“Reviving soil quality will increase the income of 75% of the world’s poor who rely on agriculture” – World Bank
Unless all of us, together, make urgent changes, a catastrophic food crisis is inevitable within our lifetime. Today, over 800 million people already suffer from chronic hunger, UN reports [6], and 2 billion people suffer from nutrition deficiency worldwide due to unhealthy soil [7].

“The Only Magic Material that Turns Death into Life.
– Sadhguru

27,000 species are becoming extinct every year – the entire ‘species’!

“The gravest ecological challenge for humanity right now is soil degradation. We must be conscious that if we kill the soil, we will kill the planet. All other issues are relevant only if we have a planet.
– Sadhguru

Valexion supports the global “Conscious Planet – Save Soil” movement. This unique movement strives to inspire world leaders, visionaries, influencers and 3,5 billion people in 193 countries to take joint action on saving our soils and to support long term government policy to revive and regenerate soils. A key point about the desired policy change is that soil must have at least 3-6% organic content. The #SaveSoil movement is being supported by various global authorities and agencies like the UNCCD and the World Food Program. #SaveSoil addresses 12 of the 17 United Nations Sustainable Development Goals. 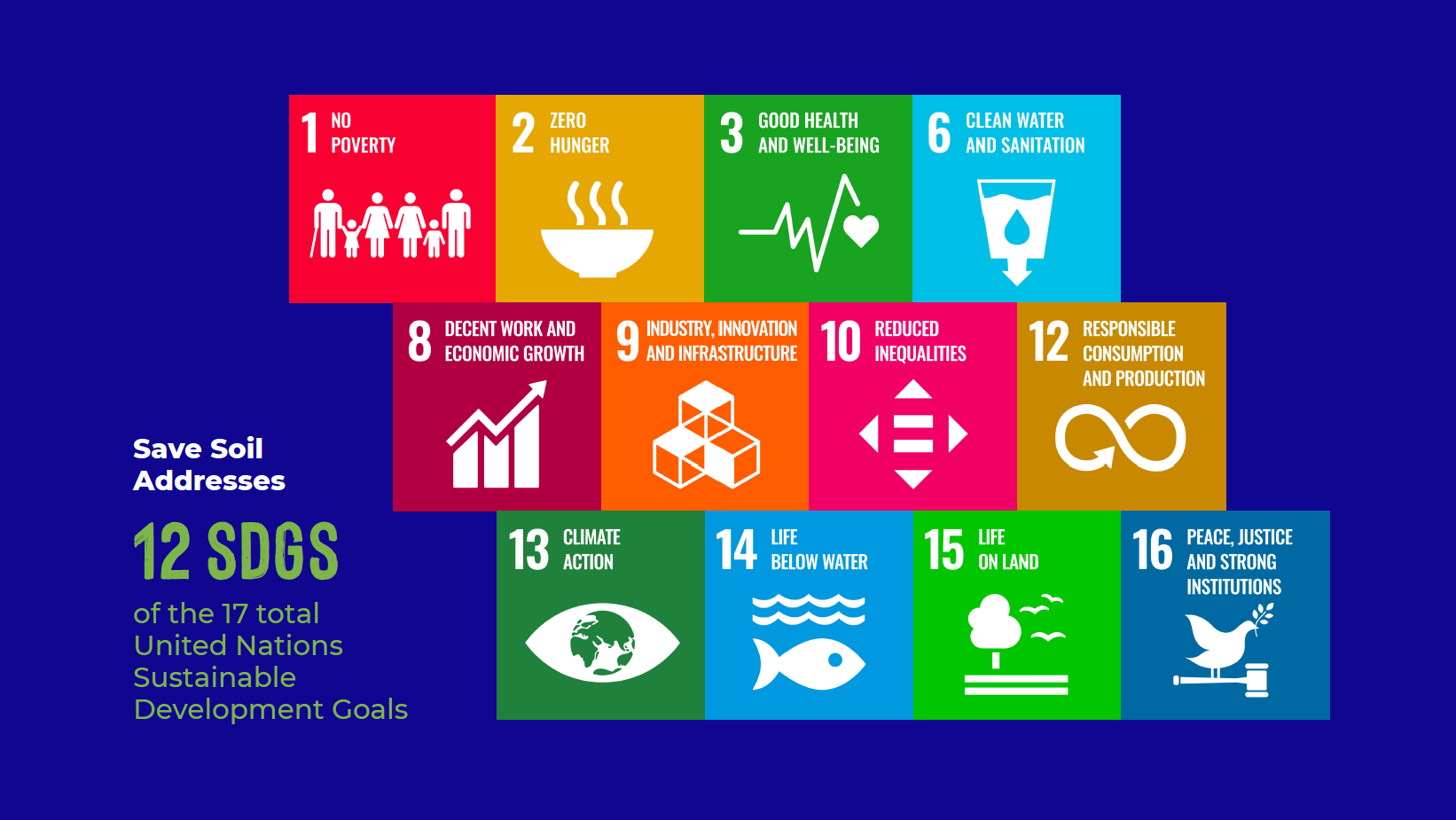 “It doesn’t matter how much wealth, education and money we have, our children cannot enjoy their lives unless we restore our soils and water resources. Conscious Planet is the only way forward. – Sadhguru

The initiator of the #SaveSoil movement is Sadhguru, one of India’s best-known visionaries and founder of the Isha Foundation. On March 21, 2022 he started a 30.000Km in 100 days motorbike journey from London to Delhi to raise awareness for the #SaveSoil campaign. Sadhguru has launched several initiatives over the years, which are powerful examples of bringing together all segments of society to create lasting, sustainable solutions for ecological and social issues. These initiatives have garnered the support of millions of people, as well as governments, global bodies, grassroots organizations and eminent public figures.
Isha Foundation, established by Sadhguru in 1992, is an international nonprofit organization dedicated to cultivating human potential through powerful Yoga programs and several path-breaking environmental, educational, health and community revitalization efforts in rural India. It has over 300 centers worldwide which are supported by 16 million volunteers.
Isha is accepted as a subject expert in several domains by international bodies such as the United Nations and World Economic Forum – which reflects in its accreditation by the UNCCD, membership with the IUCN, partnerships with UN Environment and UNESCO, and special consultative status with the United Nations Economic and Social Council. 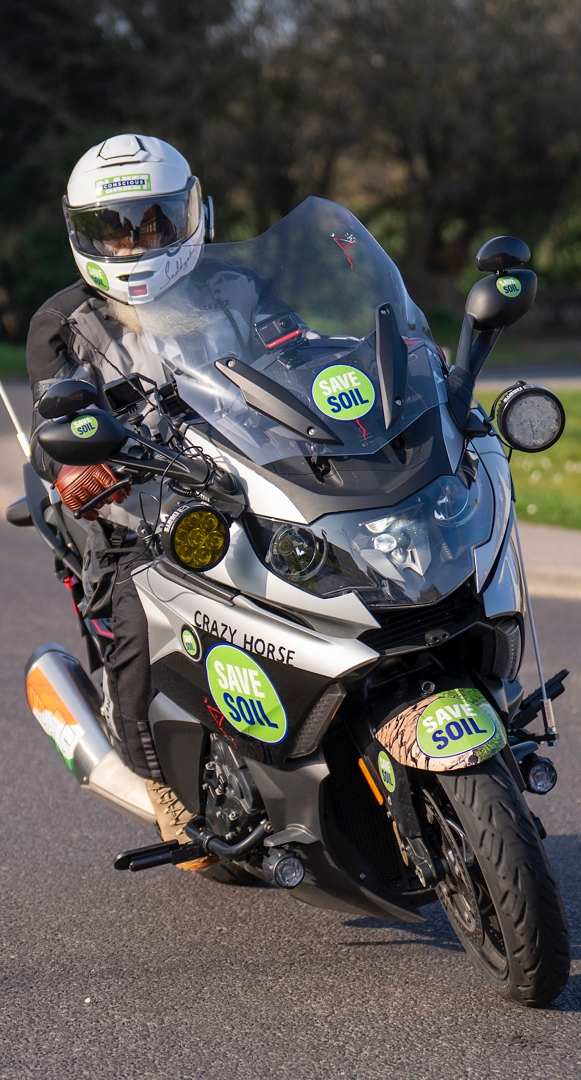